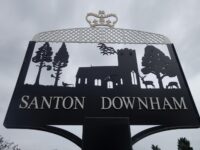 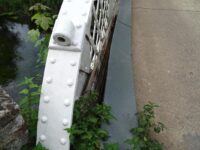 The Bridge near St Helen’s picnic site has been repaired. Sections of the rotten woodwork were replaced.

Sadly the Village Shop closed on the 1st of November.

A memorial to the end of WW1 was errected. More photos can be found on the WW1/WW2 page.

A flock of rare Parrot Crossbills visited Santon Downham. Alas we didn’t get to see them so no pictures.

The village’s defibrillator was installed in the old “phone box”

Jun 27th/28th saw Santon Downham break a number of records for the amount of rain which fell.

F-35As arrive in the skies over Santon Downham

Storm Doris brought down a number of large trees

Following a brief consultation period BT decomissioned the village phonebox. The village has taken it over and it is hoped it will become a book-exchange and home to a defibrilator

Sadly Saturday the 20th was the last day that newspapers were delivered to Santon Dowham.

Breckland News (Mace) in Brandon said that the numbers were down to just 19 houses and that it was no longer viable.

This came as a bit of a shock to those of us who have greatly enjoyed the excellent service from the staff at Breckland News and Neill our paperboy.

March 2016 saw the launch of the new Santon Downham website.

The ‘Best for outdoors’ list, published in The Sunday Times on 24 March 2013, was part of a series ‘Best places to live in Britain’. The article began: “Whether you want white-knuckle adventure or a Sunday stroll, here are the finest country escapes”. Santon Downham came 15th.

The daffodils in the photograph first flowered in 2013 and were planted around the church wall by the Sayer family in memory of Vera’s mother Annie Royal.

A Cedar of Lebanon Tree was planted on the village green for the Queen’s Diamond Jubilee. It is located near another tree planted for the Silver Jubilee Jubilee Trees 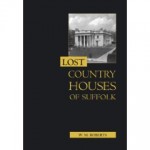 Available to buy from Amazon

The first Santon Downham beer & wine festival was held on the 16th and 16th of May. A joint venture between the Brecklands Club and Brandon Rotary it is hoped to become an annual event. 12 Beers from Adnams and the local Brandon brewery were available as well as Aspall Suffolk Cider. The event was timed to coincide with the EDP’s annual ride for life and many could be seen partaking of a welcome drink having completed the event. Commemorative glasses were on sale as souvenirs of the event.

After and absence of several years Santon Downham car boot sales resumed on the 3rd of May 2009. The 1st sale was deemed a great success and all proceeds are to go to the village hall. Car boot sales will be held on the 1st Sunday in each month.

The annual Guy Fawkes celebrations, of Bonfire and Firework display were cancelled in 2007. Increased insurance costs were blamed. It is hoped that displays may again be possible in the future.[Update 2017 – alas this has not happened]

Sadly the Post Office closed, in 2000 but the Village Shop remains open to offer a service to the village for some time to come.

1999 - Removal of sand bank from the 'sandflood' in Hall Lane

In preparation for the construction of a new bungalow 100s of tons of sand were removed from the embankment at Hall Drive. This is believed to have been deposited there as part of the great 17th Century Sand Flood.

After much debate as to who’s water tasted better Santon Downham stopped using it’s own borehole (provided by the Forrestry Commission) and was connected to mains water. Many villagers still maintain the old water was better.

Census information from 2001 records 245 inhabitants and 96 housing units (a statistical reference to a house or a flat!!).

1977 - Village plants a tree for the Queens Silver Jubilee

The tree is still going strong

On Friday the 8th of December in 1972 programme 50 of the fifth series of the television drama Dad’s Army was screened. It might have been with some surprise that the villagers of Santon Downham saw their bridge over the Little Ouse and the pretty depot corner prominently featured

Members of the Parish Council presented gifst to their chairman Mr. Ernie Lingwood and his wife Gladys, prior to their departure to Rhodesia.

Rene and Dennis Abigail took over the Post Office in September 1964.

Santon Downham is well known for its extremes of weather. We hold the dubious record of the all-time coldest June temperature of -5.6C, shared by Dalwhinnie in Scotland in 1956 and Santon Downham in Suffolk in 1962.

As large crowd of villages turned out to commemorate the even with the planting of a tree.

The little girl on the right is Brenda Largent and next to her,. her brother Michael.

In 1922 Messrs John D. Wood & Co of Grosvenor Square offered the estate on the Noroflk & Suffolk Borders for sale.

A plan of the estate was provided for prospective purchasers.

Crowds gather to see what must have been an usual sight at the time.

The Downham Hall Timber Railway was operated by the Canadian Army for the Home Grown Timber Board, a part of the Ministry of Supply during the First world war.

1893 - Many photos taken at Downham Hall 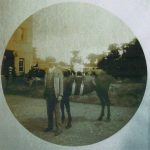 1893 was obvisously a busy year for photography at Downham Hall as we have an album of photographs dated that year.

The 1881 Census of Santon Downham, Suffolk recorded details of the Cooper family:-

Sadly, little is really known about the Cooper family and their lives in Santon Downham except a few glimpses that can be gleaned from parochial and national records. George died in March 1898 at the age of 65 years and was buried in the village churchyard. Maria lived in the village until her death at the grand age of 89 years in 1929. Maria was interred alongside her husband.

What of the children? Harriet and Ellen both became domestic servants as most girls did before marriage. They were both married in Santon Downham. Harriet married Fred Winter of Nottinghamshire in 1906 and Ellen married Benjamin Rushbrooke a soldier of Hilborough in the 1917. The first to be married in Santon Downham, however, was George. He married Ellen Green of Santon Downham in June 1898 but sadly his wife died just eight years later. By then they were living in Thetford with their two young sons, Sydney and Victor. Herbert, a gardener, married Jane Shinn in Brandon where they settled. Rose never married and lived in the village for much of her life, spending many years as house keeper to the Reverend Tyrrell-Green. Rose died in 1960 and was buried alongside her parents. Edward Cooper remained a bachelor and also lived out his life in Santon Downham where he was interred. His resting place is marked by a wooden cross inscribed Edward Cooper for 38 years Clerk of this Parish Died 8 June 1948 Aged 69..

“In 1861 my widowed great great great grandmother, Hannah Ashley nee Harrison, was living in the Railway Gate House and was the gate keeper”.

1860 - A Ramble over the Downham Estate published

During the first seven months of 1086 a painstaking survey of England was carried out on William’s orders. It was written in abbreviated Latin and Roman numerals. The entry for Santon Downham in the Domesday Book would look something like this:-

It has one league in length and 8 furlongs in width;20d in tax. Others hold there.
From Part 2- heading

It is important to note that the Domesday figures refer to heads of households rather than to individuals; so that the total population of Santon Downham would have been at least four times larger than the 20 individuals recorded.(approximately 80 people including women and children) A freeman held his land by money rent and owed no labour service to his lord. Smallholders or ‘borders were cottagers possibly freed slaves who held a few acres of land. They had to work as labourers for a more substantial tenant. Serfs or slaves would have done most of the manual work in Santon Downham. They did not normally have land of their own and had to be fed and housed at the lord’s expense.
Population of Santon Downham from Domesday to the present day.

The Vikings first came to East Anglia in 866AD. The Anglo Saxon Chronicles; the account of English history written by the monks in the reign of King Alfred(877-899AD) recorded this event-

“And the same year a great heathen army came to East Anglia; and there they were supplied with horses and the East Anglians made peace with them.

Once they had established a base in East Anglia and stocked up with horses,  the Vikings made successful attacks on York. Three years later, led by Ingvar and Ubbe, they returned to East Anglia but this time met with opposition from Edmund, king of East Anglia. After a battle they killed the king and conquered all the land.

Of the first settlers themselves, the only evidence is their burial. Pagan burials can be identified because people were buried with all their possessions for use in the afterlife. Only the first generation of settlers were pagan- they were converted rapidly to Christianity. Christians were not buried with their belongings, because they believed in a spiritual, not physical, afterlife. Probably in the late 9th. century a Viking man and woman were buried according to pagan custom in a double grave at Santon Downham. The burial was discovered in 1867. Nothing survives in the grave except the metalwork, but this can give us a clue about what the couple might have worn, and their most favoured possessions. The woman was buried with a pair of oval brooches, the man with a sword. Oval brooches were used to fasten the shoulder of an over dress and were a common part of women’s dress from the 9th.to the mid10th centuries. The brooch shown here is an elaborate double-shelled one with openwork outer shell, further decorated with silver wire.