Walking is a popular persuit to visitors to Santon Downham:-

This walk between the two churches, St Mary the Virgin in Santon Downham and All Saints in Santon, via the bank path of the Little Ouse River is slightly more than one mile in length.

Because of the varied habitat along this walk a large number of trees, shrubs, plants, fungi, birds, insects, and animals can be seen. The river contains many species of fish.

Our walk starts at St Mary’s church and turning our back on this peaceful little church we walk the 20 yards to the road. Turning right we descend an incline that leads us to the village shop, passing on our left the oldest house in Santon Downham, Bridge House. On reaching the shop, over to the left is the Forest Office and car park. At the side of the car park are public toilets and a notice board giving information about forthcoming events taking place in the forest. There is also a map showing other walks, long and short, that can be enjoyed. Following the road as it bends to the right leads us to the bridge over the Little Ouse River.

The Canadian Army erected the bridge for the Home Grown Timber Board in the early years of the First World War.

Standing on the bridge affords good river views both up and down stream.

Over the bridge at either side of the road are concrete steps leading down to the riverside path. On the left is the path to Brandon and on the right is the one we are to take towards Santon.

Once over the bridge we enter Norfolk, the river forming the county boundary. It is likely that most of the people of Santon Downham and Santon tend to disregard the fact that the former is in Forest Heath District Council area and the latter in Breckland District.

We proceed along the towpath taking note of the numerous places where the riverbank has been eroded to form small sandy ‘beaches’, enjoyed by picnicking families on warm summer days. After about half a mile a footbridge crosses the river on our right but we continue along the path that now diverts slightly away from the towpath and is no longer a grassy or sandy track but has recently been made up to a hard path with gravel topping. (During the shallow excavations for this footpath several pottery sherds were uncovered, some possible dating back to the 11th century.) This new path takes us on a winding route with, on our left, St Helen’s picnic area and the clearly visible site of what once was a moated dwelling, Santon House. (All that now remains of Santon House are the flint foundations and the remains of the square moat.

Santon House is thought to have been a hunting lodge of the priors of Thetford. The priory accounts mention repairs to Santon logge in the early 16th century.

It is believed that Santon House was the birthplace of Thomas Shadwell, the Poet Laureate and Dramatist. Clarke, In Breckland Wilds)

The path winds its way through a small wood and joins the road beside All Saints church.

Thomas Bancroft built the church in 1628 (possibly but not certainly, on the site of a much earlier church). It was restored and enlarged by the Reverend William Weller-Poley in 1858. The Reverend Weller-Poley was Rector of Santon and Vicar of Downham 1858-1887. He is buried in the churchyard with his wife Margaret and their daughter Mary Elizabeth. Their grave is marked with an imposing grey stone scroll tombstone.

We now have three main choices of route back to Santon Downham village. We can retrace our steps along the riverbank; we can follow the narrow road that brings us to within a hundred metres of the river bridge and thereby back to the village; we can retrace our steps to the footbridge over the river, cross this bridge, proceed for about two or three hundred metres until this path joins another path. At this junction we turn to the right and follow a track through the forest until we arrive at a road through an avenue of lime trees. Turning right and walking for a few minutes brings us back to our starting point.

The Forestry Commission published a small printed leaflet on the “Forest Trail” around Santon Downham. Available for sale in 1975 for 5p. 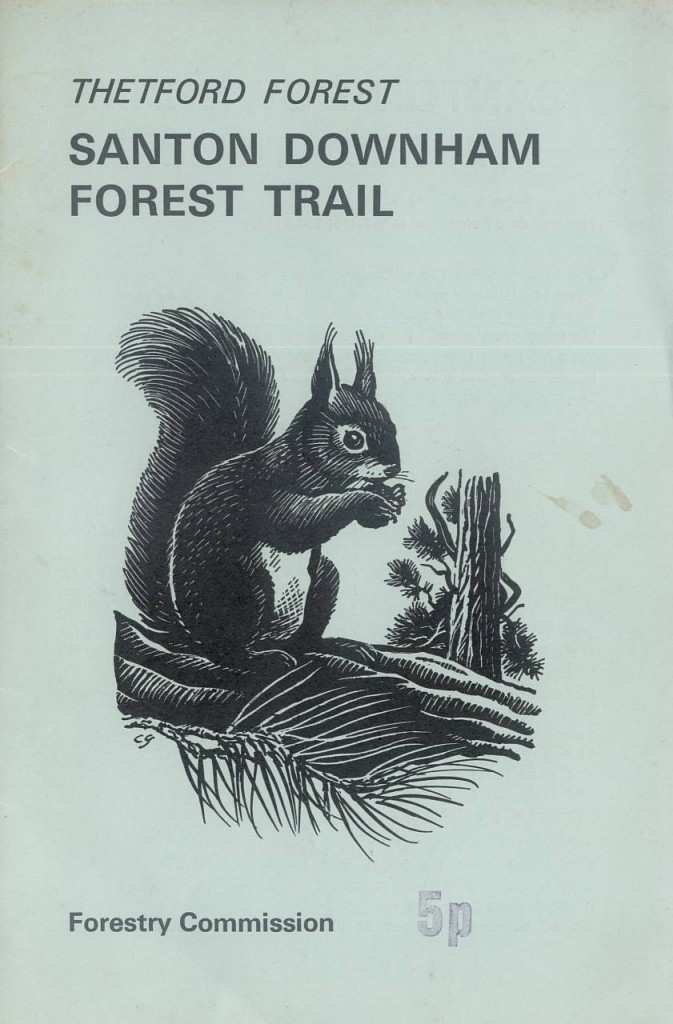 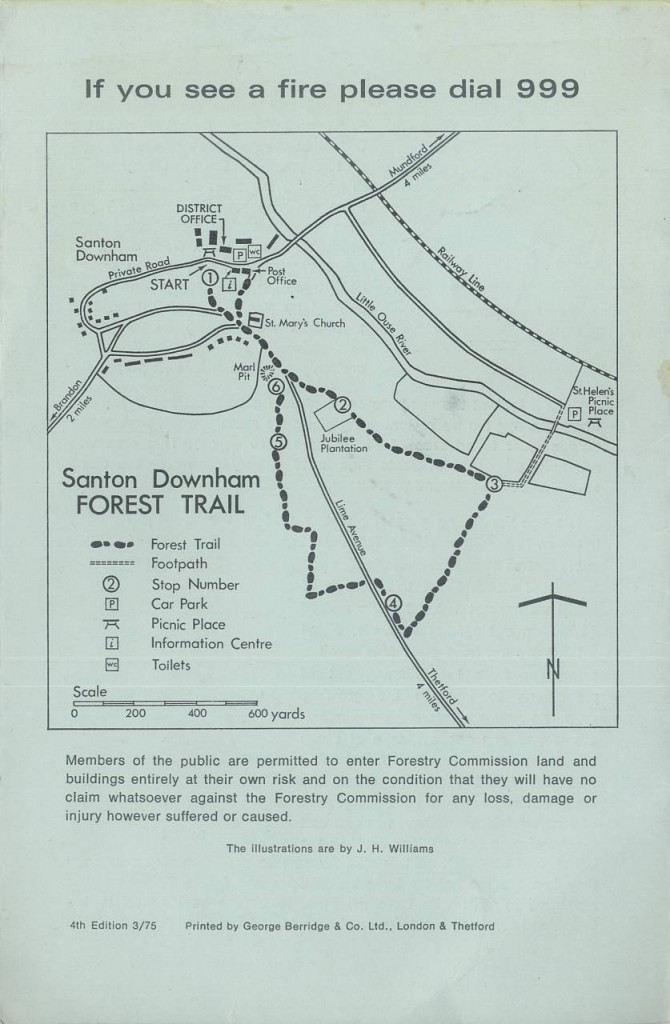 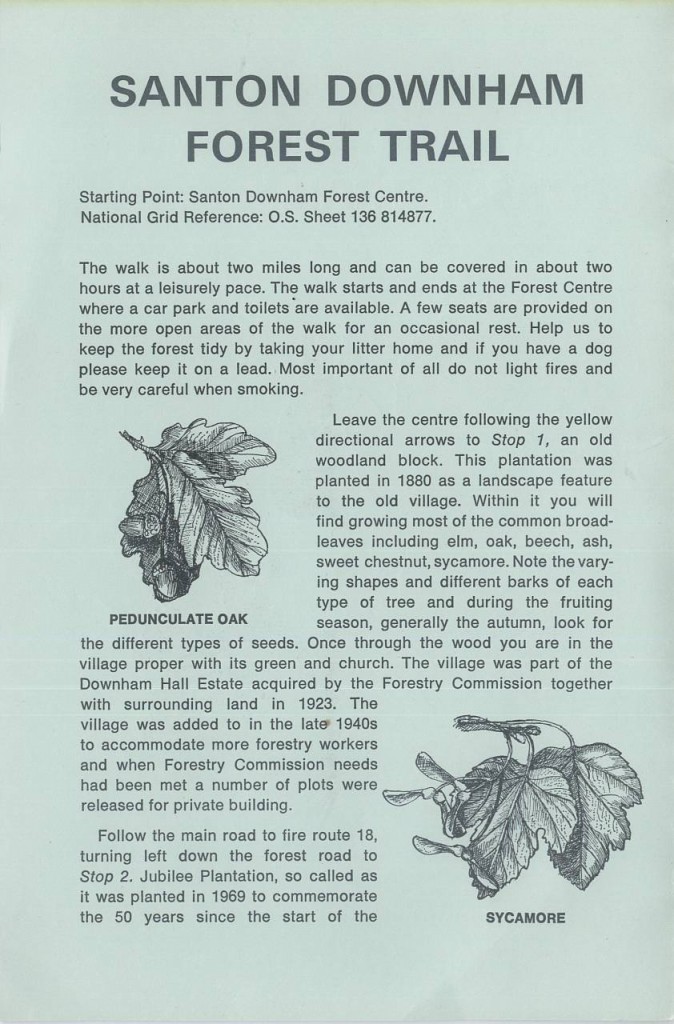 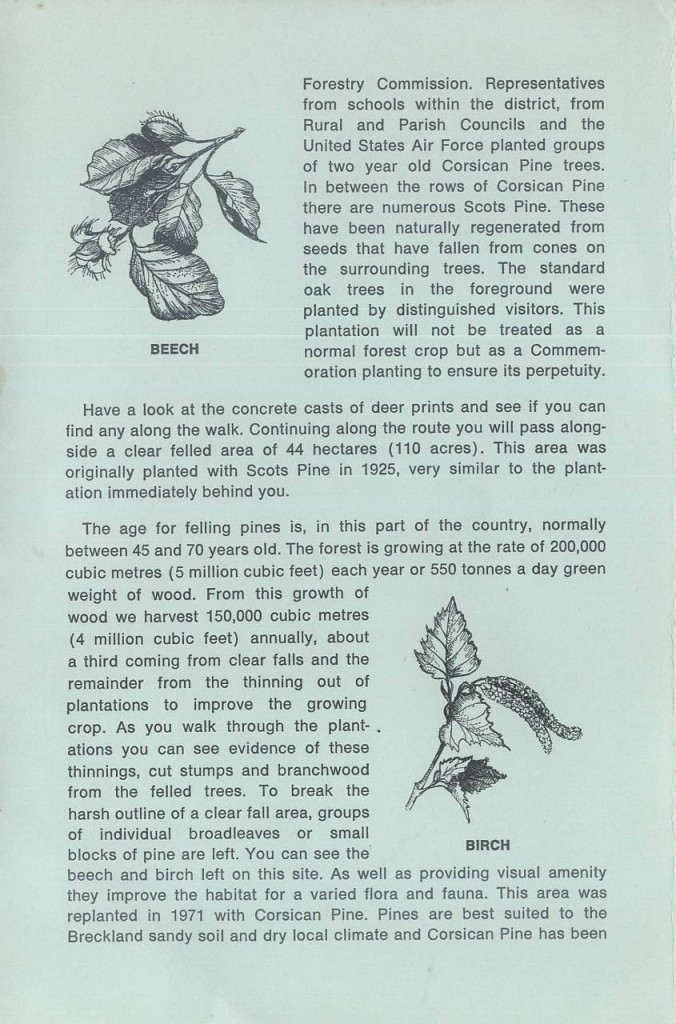 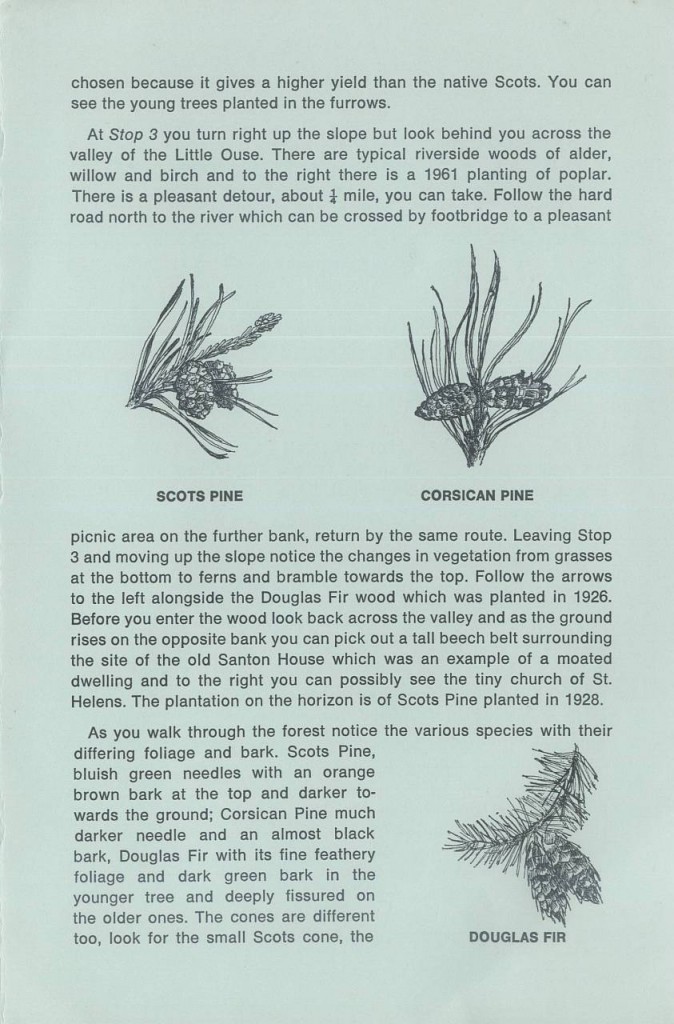 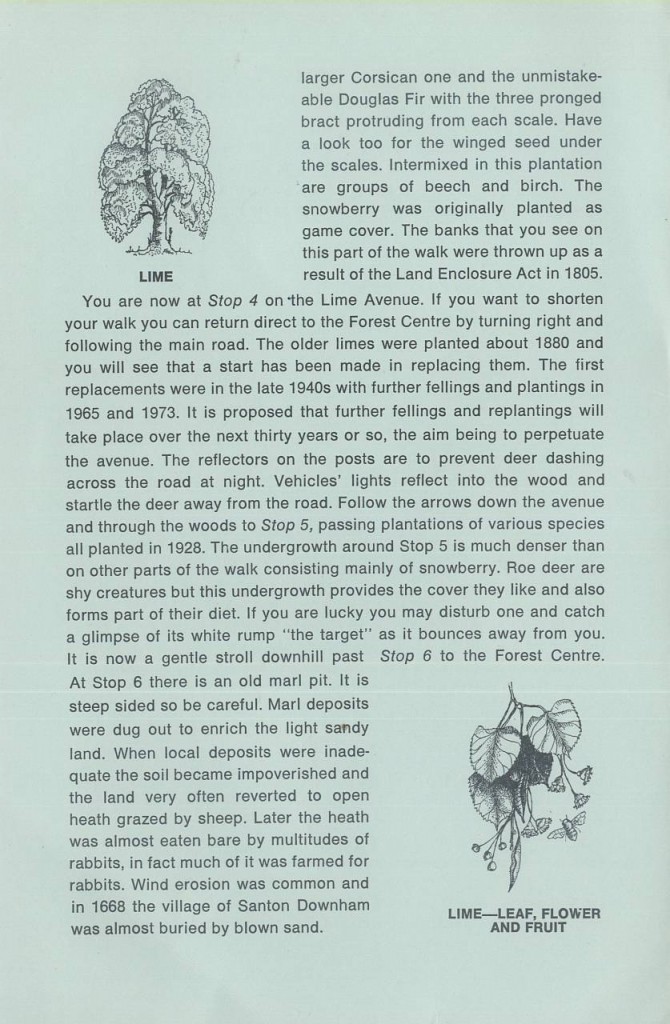