On Friday the 8th of December in 1972 programme 50 of the fifth series of the television drama Dad’s Army was screened. It might have been with some surprise that the villagers of Santon Downham saw their bridge over the Little Ouse and the pretty depot corner prominently featured. The loveable character, Captain Mainwaring, Sergeant Wilson, Corporal Jones etc. ,in firemen’s uniform are seen on a fire engine ( borrowed from Bressingham steam museum) crossing the lattice iron bridge on their way to a fire. (not in the village. The featured programme was called, “Brains not Brawn.” Our heroes are on an exercise and they have become firemen to fool the enemy but are diverted from their purpose to fight a real fire.)

Dad’s Army was written by Jimmy Perry and produced for the BBC by David Croft. The idea was possibly conceived by Jimmy as a result of his own experience as a young teenager (even younger than Private Pike) in the Home Guard.

Although the series was at first unpopular because of the war theme it survived to attain its cult status. There was a television series of 80 shown the last of which was screened on the 13th November 1977, titled “Never too old.” It featured the wedding of Corporal Jones. Many of the episodes, 67 in all, were also adapted for a radio series. The show was also successfully produced on the stage and Columbia Pictures made a film of Dad’s Army that was premiered in March of 1971.

Much of the ‘outside’ film work was carried out in the Breckland area especially the Stanford Battle area , (near Mundford) Thetford Brandon, Honington Weybourn (the Royal train episode) and of course Santon Downham. The cast used to gather for filming period at Thetford staying at the Anchor and Bell hotel. Many tales of these visits are recalled in Bill Pertwee’s excellent book, “Dad’s Army….the making of a legend”; produced on the occasion of the 30th Anniversary of the series. Unfortunately most of the main members of the cast have passed away-one of the earliest, sadly was James Beck ( Private Walker the spiv.) who died in 1973 at the young age of 42 years. The two main characters, Arthur Lowe and John Le Mesurier died within a year of each other- Arthur in 1982 at the age of 66 and John in 1981 at the age of 71.( His declining health is sadly obvious in latter programmes.)

The series lives on in many repeats on BBC One & Two, and through the efforts of such organisations as the Dad’s Army Appreciation Society (www.dadsarmy.co.uk). The society does much to keep the memory of the series in mind. An excellent museum, headquarters has just opened at Bressingham Steam Museum and Garden centre in Norfolk. A good mock up of part of the Walmington-on Sea High Street, the Village Hall and artefacts of the period are on display. Also to be seen are the Corporal Jones and the Bressingham fire engine used in the series, in fact the one which crossed Santon Downham bridge. 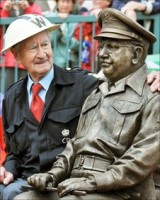 Captain Mainwaring of Dad’s Army fame has returned once more to Theford in the form of a life-size bronze cast of the character, played by Arthur Lowe.

The new statue is seated on a bench by the new (January 2017) cinema in Thetford.