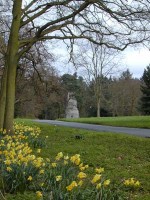 Santon Downham is a small village on the Suffolk/Norfolk border. There has been some confusion in the past especially when reporting Weather extremes with Santon Downham incorrectly being described as being in Norfolk. The county boundary is marked by the Little Ouse, which is crossed by a small bridge – Santon Downham is definitely on the south side of the river in Suffolk.

The village has it’s origins as part of the now demolished Downham Hall estate and later as a village housing workers for the Forestry Commission. Forest Enterprises still  play a big part in the village as the headquarters for the whole of the South East are located here.

Unfortunately the village has no pub, but instead has a large village hall which also has a social club attached called the Breckland Club. Both the village hall and the club host regular events. Like many villages it lost its Post Office some time ago, but a village shop remains and is a popular source of icecreams in the summer.

A pretty church stands next to the main village green, and there is a smaller green surrounded by remnants of the old Downham Hall. People visit the area for the River and the Forest and the car park at Santon Downham is the starting point for many walking and cycling activies. The whole area is very sandy and the landcape of the village still shows signs of the 17th century sand flood.

There is plenty of wildlife in the area espcially Muntjac deer and the section across the river is well known for sightings of the Lesser Spotted woodpecker.