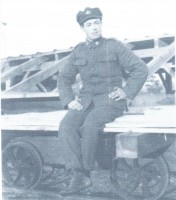 During the FIrst World War a logging line – The Downham Hall Timber Railway – operated three Bagnall locomotives between 1917 and 1922. 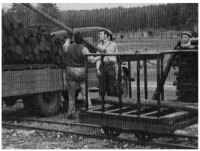 The bridge across the river was erected sectionally early in World War I by the Canadian Army for the Home Grown Timber Board, a part of the Ministry of Supply. The 3ft gauge logging line stretched from High Lodge  for two and a half miles to sawmill with a second 1.5 mile branch to Little Lodge farm

In 2018 various projects were run on The Hidden Heritage Of High Lodge, one of which was aimed at determining the route the railway ran. The three routes considered can be seen here

There is also a Wikipedia page which describes the railway/tramway

Some form of narrow guage railway was still in use in the 1980’s with original track and equipment. The site was finally cleared in 1988.

Barry Griggs wrote a piece on the subject in 2006 in the Forestry Commision Association newsletter.

His article can be found here. FCA March 06 SD

In 2017 Ronnie Moran allowed us to copy an number of photographs. This appears to show the railway (during WWI?). Exactly where it is we are unsure but considering the flooding (which indicates it’s proximity to the railway) beneath the line and the route described (across the current road bridge) this could easly be the far side of the river just past the bridge. (Current photo to follow) 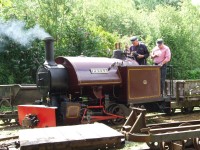 While no pictures exist of the Downham Hall timber railway in operation it is likely that Peter now preserved at the Amberley Narrow Gauge Museum was of a similar type.

His history up until the end of the war was very similar being put to use by the the Canadian Forestry Corps:-

Built in 1918, Peter was originally constructed to 3ft gauge and placed into stock for future sale by the manufacturers. It was purchased by the Ministry of Munitions for War in December of that year and delivered to the Canadian Forestry Corps at Longtown, Cumberland. After the Great War, Peter became redundant and was put up for auction by the Board of Trade in 1920.