Despite its size Santon Downham played its part during both world wars.

During the first World War young men from Santon Downham were called up . Albert Carter who was a warrener enlisted at Newmarket on the 5th. of June 1916. He was 22years old. He served in the Royal Horse Artillery and was sent to France.

Fredrick Crowther a gamekeeper from Santon Downham enlisted in the Duke of Cornwall’s Light Infantry. He was badly wounded in Salonika.

Later he was sent to France where he met Rev.Ambrose Williams from Santon Downham in rather strange circumstances on the battle field. All three survived the war and returned home. Three other men from the village were not as fortunate. A memorial to Sidney Claxton, Hector Lockwood and John Wells who all died in the war is in St. Mary the Virgin. It was during this time that a rail track was built through the village to transport timber by locomotive. The men who were stationed in Santon Downham consisted of the British Pioneer Corp and Canadian troops who were lumberjacks responsible for timber production. Fred Crowther remembers their activities in the village.

He also tells a story of how a huge Oak tree near the Rhododendrons at the entrance to the village was cut down, and how a competition was set up to move the gigantic tree trunk.

Sound bites are from boyhood memories of Fredrick Arthur Crowther who was born in Santon Downham in1908. His father also named Fredrick Crowther was the gamekeeper.

1918 saw what then would have been an unusual sight for Santon Downham an aircraft landed on what presumably is now the village green.

In 1940 there were large ammunition depots in places like Woolwich. These depots were within reach of the German Luftwaffe and therefore in danger of air attack. A decision was made by the authorities to disperse the ammunition throughout the country side where it could be better protected. Santon Downham was chosen as one of these locations. For the duration of the war the village became an ammunition depot with a detachment of the Royal Ordnance Corp in charge. This brought about a dramatic change to the every day life of the residents especially as soldiers and officers were billeted in their homes.

Mr. and Mrs. Carter who had three children; Michael, Brenda and Dawn had six men living with them. Only very large families like the Ashleys with fourteen children did not have to house soldiers.

The first soldiers to arrive in the village were Royal Engineers who built the army camp amongst the existing houses. These buildings were constructed of wooden sections set on concrete bases. The dinning hall, which was also used for social events was located near the Billiard Room. There was a large cookhouse a sergeants’ mass, barrack blocks and a shower unit for the soldiers.

An assault course was set up in front of the churchan area now occupied by part of the village green. There were two air raid shelters in the village. One was the Ice House and the other was a cellar under the old barn and Water tower, which stood near the site of the present Forestry Office. Michael Carter remembers the arrival of the ammunition-“Everywhere was full of ammunition. In the woods, every few yards. Convoys of lorries bringing stuff in and taking stuff out. It was continuous. All day and all night.”

The army blocked off both ends of the village with gates and armed guards. Villagers were issued with identity cards which they had to show when they entered the village. In spite of all these disruptions to every day life there were very happy memories of the war years in Santon Downham.

As children, Brenda Largent, Michael Carter her brother, and Bernard Ashley who were born in Santon Downham, remember the social events and the treats they were given in the cookhouse by the soldiers. The Americans who were stationed at Elveden invited the children of Santon Downham to a Christmas party and even provided transport for the occasion. On Saturdays the children helped to sort out salvage. Nothing was wasted. Paper, glass, metal etc. were collected and recycled. Attendance at church on Sundays was compulsory and Bernard was given the task of pumping the church organ. They all went to school in Brandon where they remember having to do gas mask drill! Members of the Women’s Voluntary Service helped in the general running of the village.

Members of the Home Guard also had their duties and met regularly in the Carter’s house.

Paraffin lamps lighted homes, and the laundry was done using old coppers and flat irons as there was no gas or electricity. There were no bathrooms or indoor toilets in the houses .An old tin bathtub in the middle of the kitchen floor was used on bath nights and several people had to share the same water.

Brenda remembers using the old tin bath as a sledge in winter.

Although there was rationing, the villagers did not go short of food. The Carters kept chickens rabbits and goats. Mr.Carter cultivated a large vegetable garden. There were cows in the village to provide milk. The only things that were in short supply were imported goods such as tea and sugar. Each child was given an orange at Christmas but fruit such as bananas were not available. When the war ended all the people celebrated by doing a Conga around the village.

May 8, 1945, was a joyous occasion with coloured smoke flares. Gradually the restrictions were lifted, although rationing remained for some years. Many of the soldiers kept in touch with friends they had made in Santon Downham during the war years and returned to visit them from time to time.

Sound bites taken from childhood memories of Bernard Ashley, Michael Carted and Brenda Largent, .who were all born in Santon Downham. The complete tape will be kept in the archives.#

To commemorate 100 years since the end of WW1 in November 2018 a memorial was erected in the shape of a British soldier complete with permanant poppies. The memorial is located by the bus shelter near the church 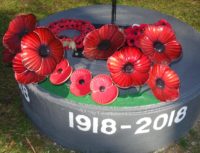 “I have is the only known photograph i have of him. Sadly there are none of his brother who also died during WW1.
I have set up a Facebook page in memory of John and his brother Samuel who died on hospital ship and was buried at sea, if you checkout the page all the information is there, including the battle where John died and the unfortunate circumstances of ill health which caused Samuels death while on hospital ship. “

the page can be found here