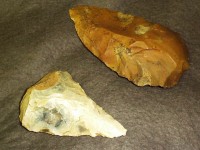 Santon Downham is one of the most important and earliest known sites of human occupation in Britain. Many hand-axes have been recovered from river gravels that formed when, after the major glaciations, the drainage pattern was assuming its present form. Hand-axes are heavy pointed or ovate tools used for butchering and other purposes. Henry Prigg found the first hand-axe in 1865. Many hundreds were found within a few years, and continued discoveries were made up until 1910. They include numerous elegant specimens in fresh condition and justify J. Evans statement that some of them afforded ‘the finest instances of the skill of the Palaeolithic period which has been found in Britain, or elsewhere.’ Today, these ancient tools are in the collection of many nationally important museums but sadly very few are on display to the public.

As at High Lodge, the geological evidence helps to date these tools found in Santon Downham. Many of the flint hand axes have acquired a mellow russet colour. This is said to be due to the presence of iron oxides in the gravel where the worked flints lay for many thousands of years before people in the 19th. and 20th.century discovered them.

It is hard to imagine, that the people who lived in and around this area, enjoyed hunting wild animals that no longer exist.

The land was not only occupied during the warm interglacial, but also during the cool climates. People had therefore adapted to difficult conditions, in which abundant game must have been a great attraction. Many of the animals that they hunted are no longer found in Britain or are extinct such as the lion, bear, mammoth and woolly rhinoceros. Horses deer and bovid were their main source of meat.

The Mesolithic or Middle Stone Age.

Worked flints from the Mesolithic period have been found in Santon Downham. Recorded finds include a long narrow flake, a large flake and a small blade.

At this time people lived by hunting wild animals, catching fish and shellfish and gathering fruit, nuts berries and roots from the forest. The Little Ouse in Santon Downham would have seen many fishing expeditions. 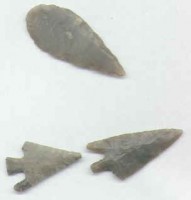 About 4000 BC settlers from the European mainland brought a new way of life to this part of East Anglia. Grimes Graves only a mile from Santon Downham, may have had some connection with this village. People grew wheat and barley and kept cattle, sheep pigs and goats. For the first time pottery appeared as well as new tools such as polished axe-heads and flint leaf shaped arrowheads.

The introduction of farming had a major impact on the landscape. Felling with flint axes and fire cleared tracts of forest. Ashes enriched the soil for a few years but when the nutrients were exhausted the farmers moved on and cleared another area.

Various flint tools from the Neolithic period found in Santon Downham have been recorded. They include a sickle, polished knife, an axe head a chopping adze and leaf shaped arrowheads.

Veronica Moran ©2000
References SMR Bury St. Edmunds.
Thanks to Michael Finch for loan of arrowheads
Thanks to Mr. Bone of Ancient House Museum for permission to photograph hand axes.
Photographs by V. B. Moran