In 2014 Hilary Steed was reminded of a photograph she had of her childhood in Santon Downham and the 1955 Christmas Party:-

Well, there we were, all poised to tuck into our jelly and blancmange, when the photographer called out, “Say cheese”!  This was a party for the children of the local Forestry Commission employees, held around Christmas 1955, I believe. 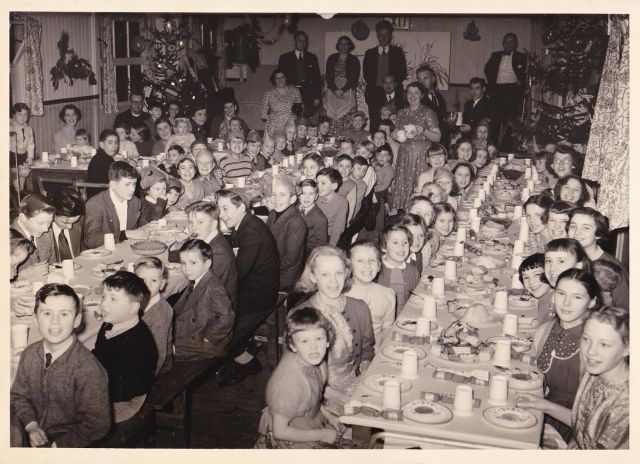 I seem to remember that we paid a small sum (probably half-a-crown) and for that we had on-stage entertainment, party food and crackers.  Then at the end, there was great excitement as we were each called up by name to receive a present from Father Christmas!  My present that year, I recall, was a hand puppet.  It seems the Village Hall was not really equipped for over 70 party-goers, as we were all asked to bring our own spoon.  I took my favourite ‘Coronation’ spoon, but sadly left it behind at the end.  I wonder if it’s still there?

Yes, I am indeed in the photograph!  In the row of girls facing right, I am the seventh from the camera with my head almost on the table (Iwas Hilary Stannard then). 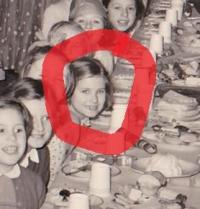 The only other person I can name is Andrew Sherrell (second boy from the camera, in a dark jumper).  He lived near me at Lynford Cross; we were both five years old at the time. 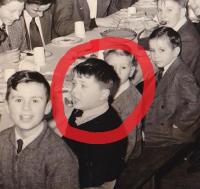 At the last Santon Downham Christmas party I attended, we danced the ‘Twist’, so I guess that would have been in 1961.  By then the price had gone up to about five shillings.  I remember I had to borrow some money that time, from the neighbour who took me!

The photograph was taken by Studio Five in Brandon, who still exist (and still hold the copyright).